Places to visit in Kermanshah 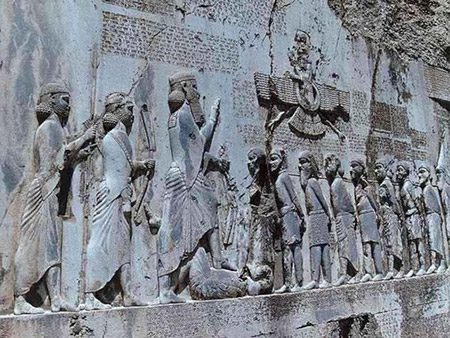 Bistoun’s inscription at Bisotun - which dates to 522 BCE, lies some 1300 meters high in the mountains. The site is a UNESCO World Heritage site and has been attracting visitors for centuries. The Behistun inscription is in old Persian cuneiform. What the Rosetta Stone is to Egyptian hieroglyphs: the trilingual inscription (in Old Persian, Elamite and Akkadian) was crucial in the decipherment of the script. The relief above the inscription depicts Darius facing nine rebels who objected to his crowning. At the king’s feet lies Gaumata. The location of this important historical document is not coincidental: Gaumata, a usurper who is depicted as lying at Darius’ feet, was a Medean and in Achaemenid times Behistun lay on the Medea-Parsa highway. Behistun is also notable for three reliefs at the foot of the hill that date from the Parthian era. Among them is a Hellenistic-era depiction of the divinity Bahram as the Greek hero Hercules, who reclines with a goblet in his hand, a club at his feet and a lion-skin beneath him. Because it lies on the route of an ancient highway, this life-size rock sculpture may reflect Bahram’s status as patron divinity of travelers.

Taghe Bostam The rock reliefs at Taq-e Bostan lie four miles north-East of Kermanshah, where a spring gushes from a mountain cliff and empties into a large reflecting pool. One of the more impressive reliefs, inside the largest grotto (ivan), is the oversized depiction of Sassanid king khosrey the second (591-628 CE), who appears mounted on his favorite charger, Shabdiz. Both horse and rider are arrayed in full battle armor. There are two hunting scenes on complementary sides of the ivan: one depicts an imperial boar hunt and the other depicting the king stalking deer. Elephants flush out the boar from a marshy lake for the king who stands poised with bow and arrow in hand while he is serenaded by female musicians following in other boats. These royal hunting scenes are narrative murals in stone are count among the most vivid of all Iranian rock reliefs. The Taq-e Bostan reliefs are not limited to the Sassanid era. An upper relief depicts the 19th century Qajar king Fath-Ali shah holding court.